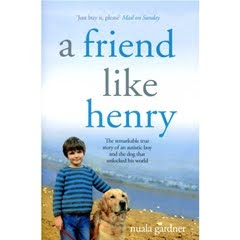 A Friend Like Henry
by Nuala Gardner
Year 2007,
Hodder & Stoughton publications,
342 pages,
Price: RM 38.90,
ISBN 978 0 340 93402 9
Image taken from http://bit.ly/v1SOPA
A Friend Like Henry written by Nuala Gardner was a real-life story about his son's, Dale which had an autism during his childhood. The autism itself appeared during Dale's 3 years of age by expressing a classical symptoms of autism including non-expressive of two-way communications, uncontrollable temper, repeating and mimicking people's words and sensitive to sudden changed environment and certain words like "School" and "OK".
With a bad impression from the society for her son and unhelpful psychologist and hospital to enlist her son in the special educational care, had forced Nuala's finding her own way of supporting his son educationally, mentally and socially. With a strong spirit of Nuala's family and her husband, they were able to healed their son's suffering by creating their own way of support system and educational theory like Dale's obsession with Thomas the Train and Mickey Mouse.
At the later years, Nuala's bought a golden retriever puppy, Henry as a Dale's autism treatment. Once again, Dale obsessed with Henry and that encouraged him to talk and connect to people. Amazingly, Dale changed to an independent person by taking care of himself and his dog. He begin to showed emotions like empathy, sadness , understand jokes, mingled with his friends and schooled in a normal class.
Now, Dale Gardner, a young man in his 20s is a normal man with a normal life staying with his family and sister who's also autistic. He is an active man and had a keen interest in trains and Boy Scouts. Well, Henry the dog passed away and Dale adopted another Golden Retriever as his companion.
"Disturbing, Suffering and once you've succeed...anything doesn't matter"
This book is suitable for parents that's looking for their child development and finding ways to encourage their children to explore their life themselves. With a parents support, I guess the child will be more confident and sure about what he wants to do with his life.
Posted by Xendee Wong at 10:03 PM No comments:

A story about a Somalian nomad girl becomes an International Model. This book tells you how she had lived a nomad live in deserts, responsibilities to taking care of goats and water. According to her, life in Somalia for a girl wasn't easy. A girl born to married to a man which she don't like just because it's for her father exchange for a camel! Worst still, Somali girls have to undergoes Female Genital Mutiliation(FGM) in an inappropriate procedure. She ranaway, grab the opportunity to live in London, strive for the best, going to the States and become a model.

'Remarkable courage...the most beautiful inspriration to anyone'-Elton John
Currently, Waris is an UN Ambassador against FGM.

A Must-Read book...interesting, funny and extraordinary.
Posted by Xendee Wong at 2:40 AM No comments: